I recently met a highly qualified flight engineer who was forced to retire well before he was ready. The only commercial airliner that still has a third seat in the cockpit for a flight engineer is the Airbus A380. Computers and automation have made the role almost completely redundant.

The world is changing and we all need to create the necessary level of value for our employer and customer to fund our role.

John Henry was one of the first workers to be replaced by automation despite being the best in the world at what he did. Here is S.E. Schlosser retelling the legend of ‘The Steel Driving Man’. It contains lessons for all ‘knowledge workers’ today.

Now John Henry was a mighty man, yes sir. He was born a slave in the 1840’s but was freed after the war. He went to work as a steel-driver for the Chesapeake & Ohio Railroad, don’t ya know. And John Henry was the strongest, the most powerful man working the rails. 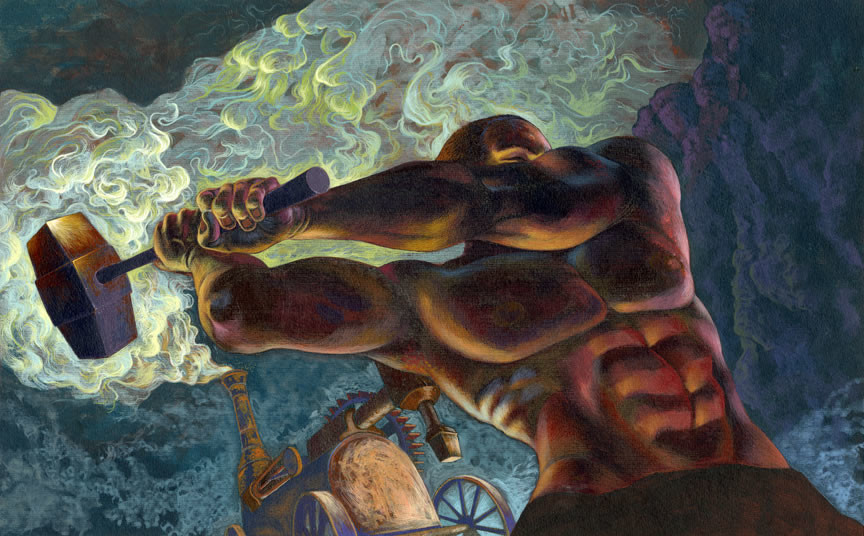 John Henry, he would spend his day’s drilling holes by hitting thick steel spikes into rocks with his faithful shaker crouching close to the hole, turning the drill after each mighty blow. There was no one who could match him, though many tried.

Well, the new railroad was moving along right quick, thanks in no little part to the mighty John Henry. But looming right smack in its path was a mighty enemy – the Big Bend Mountain. Now the big bosses at the C&O Railroad decided that they couldn’t go around the mile and a quarter thick mountain. No sir, the men of the C&O were going to go through it – drilling right into the heart of the mountain.

A thousand men would lose their lives before the great enemy was conquered. It took three long years, and before it was done the ground outside the mountain was filled with makeshift, sandy graves. The new tunnels were filled with smoke and dust. Ya couldn’t see no-how and could hardly breathe. But John Henry, he worked tirelessly, drilling with a 14-pound hammer, and going 10 to 12 feet in one workday. No one else could match him.

Then one day a salesman came along to the camp. He had a steam-powered drill and claimed it could out-drill any man. Well, they set up a contest then and there between John Henry and that there drill. The foreman ran that newfangled steam-drill. John Henry, he just pulled out two 20-pound hammers, one in each hand. They drilled and drilled, dust rising everywhere. The men were howling and cheering. At the end of 35 minutes, John Henry had drilled two seven foot holes – a total of fourteen feet, while the steam drill had only drilled one nine-foot hole.

John Henry held up his hammers in triumph! The men shouted and cheered. The noise was so loud, it took a moment for the men to realize that John Henry was tottering. Exhausted, the mighty man crashed to the ground, the hammer’s rolling from his grasp. The crowd went silent as the foreman rushed to his side. But it was too late. A blood vessel had burst in his brain. The greatest driller in the C&O Railroad was dead.

Some folks say that John Henry’s likeness is carved right into the rock inside the Big Bend Tunnel. And if you walk to the edge of the blackness of the tunnel, sometimes you can hear the sound of two 20-pound hammers drilling their way to victory over the machine.

For those in sales; being friendly, building rapport and managing relationships is not enough. Yes, these are important qualities for sales success because opening well to build rapport and trust is essential. Yet in today’s ADD afflicted world, no potential customer is seeking a new friend to consume their precious time.

‘Friending’ and leading with a relationship approach is a massive mistake. Successful seller’s today instead adopt a value driven approach that earns a relationship

What value do you provide that cannot be replaced with a lower costs resource, human or automation? Yes, the bots are coming for your job and every company is now focused on creating omni-channel customer experience to meet buyers at every stage of their journey. Customer experience, rather than salesmanship, is the X-factor in growing a profitable business today. It is created through the provision of the right content and engagement on a website, blog, mobile apps, social media, on the phone and in person at the right time.

What is it that makes your sales career secure and prosperous?