“It’s never been easier to identify decision-makers, research them and get their cell number… yet it’s never been harder to succeed in B2B sales”

Sales Thought of the Week [By Andy Paul on June 26, 2017]: Selling is NOT harder than it’s ever been. However, on the other hand, It’s not easier either.

To prepare for an interview on Accelerate! last week I was reading a new sales book from my upcoming guest and I was struck by something he wrote. He said, and I’m paraphrasing, “we all know that selling is harder than it’s ever been…” My immediate reaction was “Oh, c’mon man. Not this crap again!”

Umm. How do I put this nicely? It’s time for the people who keep spreading this myth to get over it. Selling is not harder than it’s ever been.

Yet, it seems like everything I read or hear about sales today starts with the premise that selling is so much more difficult now than it was “before.” “Before” being the code word for the mythical pre-Internet days of the 20th century when apparently B2B selling was so easy that customer orders just flew into your hands like fish jumping into a boat. (At the same time, you sales sentimentalists who romanticize the past and believe that selling in today’s B2B world is a piece of cake compared to when you carried a bag, need to get over that. It ain’t true.)

Yes, selling is hard. However, selling has always been tough. It’s no harder or easier now. Which makes me wonder why so many sellers appear so intent on trying to scare themselves with this mythical bogeyman of “selling today is harder than before.” Let’s look at just a few of today’s “sales is harder now” myths:

It’s harder to reach prospects than before. Uh, no, it’s not. It’s just hard. It’s always been hard. I could make the argument that with all the information that’s available at a seller’s fingertips today to help target and connect with the right person that it has never been easier to get in touch with a prospect. However, I don’t think it’s easier today. Selling is still hard, gritty work.

A companion myth is “Well, no one answers their phone anymore.” I hate to break it to you but no one has ever answered their phone. In “Before”-land there were almost no direct dial numbers into companies. All calls were routed through receptionists at switchboards. And, before voicemail, all of the executive decision makers you were trying to reach had secretaries. Secretaries (now called admins) would answer the phone and make the decision whether or not to pass your message along to the boss. At least a voice mail system isn’t making the decision about whether your message is worth recording. Yet.

Like always sales rewards effective, consistent and value-based persistence. That’s no different today than before.

Cold calling isn’t as effective as it was before. Do I really need to get into this? Proactive outbound calling works just as well as ever. However, there is no getting around the fact that it is still hard work. Picking up the phone and calling a stranger can be intimidating. I know people who’ve been in sales for 30 years and still hesitate a bit before they make prospecting calls.

In “Before”-land there were precious few resources you could use to research the prospects you were calling on beforehand. That made the opening seconds of a sales call extremely challenging. Today, if you’re calling cold into a prospect without taking advantage of tools like Google, LinkedIn or DiscoverOrg to do your homework and preparation first then you’re just a fool.

Is cold calling more difficult, or any less effective, today than it was in the past? No.

Customers are more overwhelmed with information than before. It’s no secret that buyers have access to more information. But they aren’t overwhelmed. In fact, recent research, as detailed in books such as Absolute Value, What Really Influences Customers In the Age of (Nearly) Perfect Information, shows that, far from being overwhelmed, tools such as search engines, review sites, and peer networking have made it easier than ever before for customers to understand and evaluate their options.

The reason your prospects aren’t making a purchase decision isn’t that they are too overwhelmed by information to make a choice. No, they’re not buying because you haven’t given them a compelling reason to buy from you.

The bottom line is that selling has always been a tough gig. That hasn’t changed. And it’s unlikely to change in the future.

Henry Ford was quoted as saying “Whether you believe you can do a thing or not, you are right.” If you use these flimsy myths as excuses for why you aren’t able to hit your number, then you’re proving him right.

End of Andy’s writing and the rest is now from me.

Andy makes very valid points. It’s never been easier to research and source the contact details of decision-makers. This includes getting hold of their cell phone number and finding context for outreach. But if selling or not more difficult today than it has been in the past, why are the rates of sales failure (the percentage of people hitting their sales targets) escalating at an alarming rate? Here are stats from my upcoming book, Combo Prospecting.

In 2016, I conducted a boardroom round table for one of the world’s leading technology companies. I had a 15-minute presentation to stimulate conversation, and I said I believed the majority of B2B salespeople fail to achieve their sales targets over the course of a full financial year. I then put these statistics from 2014 on-screen:

I could see the skepticism in the body language of every person in the room. “I can sense that most of you don’t believe those numbers,” I said and waited for the reprimand about statistics being fake facts. Instead, one CEO cautiously admitted that it was actually worse in her corporation. Another agreed and said their failure rate was 75%, and another said there were always a handful of salespeople who did the big enterprise deals but that almost 80% missed or barely fell over the line. They all agreed it was getting worse with average deal sizes shrinking, decision-makers becoming more distrustful, and time frames blowing out as buyers sought broader consensus before going ahead.

The analysts also agree that the trend is negative for B2B sales performance. Research from CSO Insights increased the failure rate of sellers from 43% in 2014 to 56% in 2016 [Tamara Schenk and Jim Dickie, CSO Insights, Sales Enablement Optimization Study, 2016.] A 2016 Harvard Business review study cited the number of underperforming salespeople at 63% [Lynette Ryals and Iain Davies, The 8 Types of Salespeople, Harvard Business review – Ideas and Advice for Leaders, January 2016.] Objective Management Group reported that three out of four salespeople were failing when they published their findings in The Huffington Post [Dan Lyons, Sales Reps Have Little to No Idea What They’re Doing.

The statistics are sobering and the reality is that deal sizes are going down while the cost of new client acquisition is going up. There is one inevitable result with these trends—fewer expensive field salespeople and greater reliance on designing a customer experience that is supported by relevant content publishing and automation.

This is what I see as I work within sales organizations today: 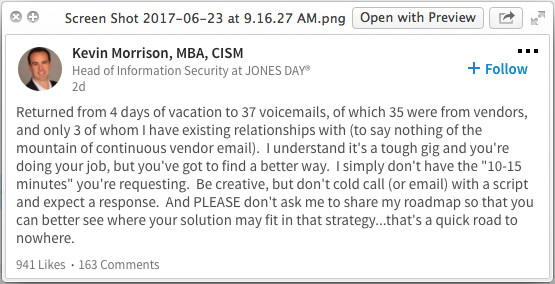 I respect Andy Paul and over to you. Is selling harder or easier today? If selling is easier with all the tools available then why are sellers failing at ever increasing rates?